Science Fiction Romance. Sometimes it’s the strange settings that make these love stories special, or the time period—far in the future—or the strange creatures that are fought or befriended while the hero and heroine fall in love.

But sometimes the hero or the heroine fall in love with the alien. That’s when things really get interesting. Think Starman, or the Bicentennial Man (yes I am counting the robot as alien), or Liloo in Fifth Element. Or Captain Kirk, pairing up with just about every alien chick he could find. J

This is more than falling in love with someone from another culture. More than a difference in language. We’re talking about beings worlds apart. They think differently than humans, act different, look different. Some of them even come with extra appendages. And it’s not a bad thing.

Imagine having sensual nerve lines running over your lover’s body—stroke them and they shudder with pleasure, the nerves stiffening and rising up into thin ridges. But be careful, following the nerve lines with fingers and tongue can have a cultural impact you might not be ready for. For the Inarrii this can be tantamount to a marriage proposal. 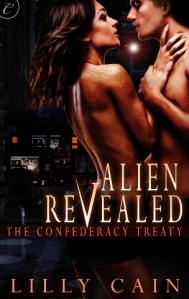 vealed, the first book of my series, an alien spy crash lands on earth and is helped by human Starforce pilot, Major David Brown. Here’s their first mental encounter:

She closed her eyes and looked with her empathic senses, searching for a lover who could not exist among the humans. It was a fruitless search, and she knew it, but her body was crying out for release and her mind following suit.

The medlab lay quiet around her. As her psyche wandered, she encountered only a few alert minds. Her thoughts returned to the confusing offer made by David. The big male could not know what kind of help she would most like at this point. Finally, among the sleeping minds on the base, she found his presence—much brighter than she would have expected. She looked closer, her mind grazing across his, expecting to sense the flow of muted emotion that ruled a subconscious mind. Instead bright, focused passion flooded her. Immediately she was swept inside.

Alinna gasped as David’s lips found hers. She struggled to pull away, shocked at the intensity of the sensation. The major was experiencing a vivid dream, and she could sense every nuance. This had never happened before; her talents had always stopped at the empathic level, and she’d chosen partners with the same level of ability. But here, she could feel his touch, see every detail, even smell his spicy cologne. David’s mind held on to her psyche, his desire a leash that wound around her and held her tight. As if he realized he had caught her within his dream, his mind pulled hers into a close embrace. His dream body molded itself to hers. She could feel the outline of his hardened muscles through his uniform, and her heart leapt with desire.

“So, you want me to call you Alinna.”

Alinna stiffened, this shock even greater than the last. There was no indication on the species evaluation to indicate humans had any sort of psychic ability, but clearly they were wrong. The man had just spoken to her mentally, albeit in a dream.

“If I call you Alinna, what will you call me?” 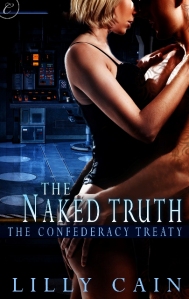 His mental voice rubbed against her in the same way his deep-toned speech did in the physical world. It resonated with sexual promises, no matter what the words communicated. She relaxed against him and felt his grip loosen in kind. This was a dream to him, a sexual dream. She felt her own desire return with its familiar ache. She smiled. She wasn’t one to put aside an opportunity like this. She’d figure out how he came to have these abilities later, but for now she’d make this the best dream he’d ever had.

I love the Inarrii. Wish I could meet one myself. Who is your favorite alien lover? Why? Comment and leave a contact email and I will be giving away a .PDF copy of the first book in the series.

Alien Revealed – Book One of The Confederacy Treaty – June 2010

The Naked Truth – Book Two of The Confederacy Treaty – June 2011

For more information about Lilly Cain, and for excerpts of her stories please visit www.lillycain.com. You can also follow her on Twitter at www.twitter.com/LillyCain or on Facebook at www.facebook.ca/Lilly_Cain 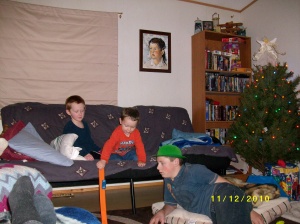 Ever seen that bumper sticker that proclaims: If I’d known how much fun grandchildren would be, I’d have had them first?  Well it’s true. I have four grandkids so far and they are so much fun. They range in age from 14 years down to 5 months. So far, I haven’t had alot of time with the youngest. His parents are afraid I might corrupt him just like the first three!

We go to the park, play on the slides and swings, go swimming, go out for ice-cream, and go camping. They already know that it’s not a good idea to tell Mom and Dad everything that happens at Grandma’s because parents just don’t understand how pretzels and marshmallows can make a good dinner. Or how it can be okay to stay up tomidnightto see if you can catch one of Santa’s elves checking up on you.

The oldest is a very enthusiastic musician, and he comes to Grandma’s house to practice on his bass clarinet. It seems I’m the only one who recognizes the future Mozart flowing forth from beneath his fingers. Here, he can practice as long as he wants without worrying about waking up the baby. Sometime it’s not fun to be the oldest! Last spring, I got to go and hear the Spring Concert that his school band put on. He is so proud of being chosen for the band!

The next in line is a four and a half year old redhead, and he’s very proud of that hair! He started school this fall, and I’m not sure they’re ready for him. He can talk nonstop for hours, telling me all about his day, and how his cat Zen is doing, and where he thinks we should go camping this summer. He’s pushing for a small town in the Mountains called Revelstoke. His parents took the family camping there last summer and he can’t wait to go back. There’s a dam and a great big swimming pool and best of all, a train museum! He’s very partial to trains.

Tank is only three, and I call him tank for a reason. He may be small but he’s solid and once he decides he’s going to do something, it’s like trying to stop a tank. He has a stubborn streak a mile wide!  He has one of those grins that you know is going to cause the girls a lot of trouble when he gets older,  and his eyes twinkle with mischief most of the time.

Yesterday, I picked all three of them up at lunchtime and we went to the park one town over where there’s a water spray area as well as a play area and lots of nice shady trees. I sat under a nice shady tree with my book and the picnic basket while the kids ran and played and came to snack on the picnic food whenever they felt like eating.

I don’t remember my children ever being so easy to look after. So if you have the chance, get yourself  some grandkids. They’re so much more fun than the original kids!